Peter A. Allard School of LawVideo Game Law (423C)
Hey Y,all, Came across this article today and thought it was interesting. A Montreal video game company just got the exclusive rights to Charlie Chaplin and intends to make a game based around the individual. For those of you who are unaware who Charlie Chaplin is, he was a major silent film movie star throughout […]
Hi everyone, I hope you’re doing well as we move closer to the end of the semester! Following in the footsteps of a few of you, my presentation is now (finally) ready to show off! It’s about Nintendo, all the ways they’ve tried to protect their IP rights, and how it has affected their fanbase. […]
Hi, everyone.  I would like to post my short presentation of Income tax issue of video game industry in the link below. https://drive.google.com/file/d/1t1RAL8q0U_oloaA8ACZCFpmC-5b-o3s1/view?usp=drive_web   If you are a fan to Might & Magic, you may have interest to read the reference article below. Reference material: Anna Vvedenskaya, “Common features of video games and social networks: […]
On December 6th the New York Islanders are holding an Esports night in collaboration with the Faze Clan. The Faze Clan is a group of individuals who run a lifestyle and media platform that is focused on gaming and video game culture for teenagers and young adults. Islanders Esports Night will begin at 5 PM […]
Hi everyone, Jakub and I did our presentation on the legality of daily fantasy sports (DFS) games that utilize sports card NFTs as part of the contest. please use the google drive link to access a recording of our presentation:  https://drive.google.com/file/d/1F4QavItI4TuDCuHBTaRQQCzWxbOq0z77/view?usp=share_link
An interesting story has recently come out, featuring Nintendo shutting down a relatively large Super Smash Bros tournament that was set to go ahead later next week. The story is still developing, but as of now, it looks like there was some sort of licensing dispute between the organizer of the tournament, Smash World Tour, […]
Earlier this week, Nintendo issued DMCA takedowns to SteamGridDB, a community site that hosts user-created images to be used in on Steam. Although the site is primarily meant to provide an aesthetically-pleasing alternative for fans, Nintendo games are not available on Steam and therefore would only be there as emulated ROMs downloaded without Nintendo’s […]
Hi everyone,   I have uploaded my presentation on Videogame Emulation and Copyright here since it snowed out yesterday. All the best for your exams and happy holidays!   Sze Perng   https://drive.google.com/drive/folders/1MbjIiipvD_jSH5nz7Drw6y1J7WnXs6hl?usp=sharing
I came across this tweet from a Call of Duty news account. It seems the Code of Conduct is actually carrying some weight after all. Take a look (I’ve redacted the expletives). 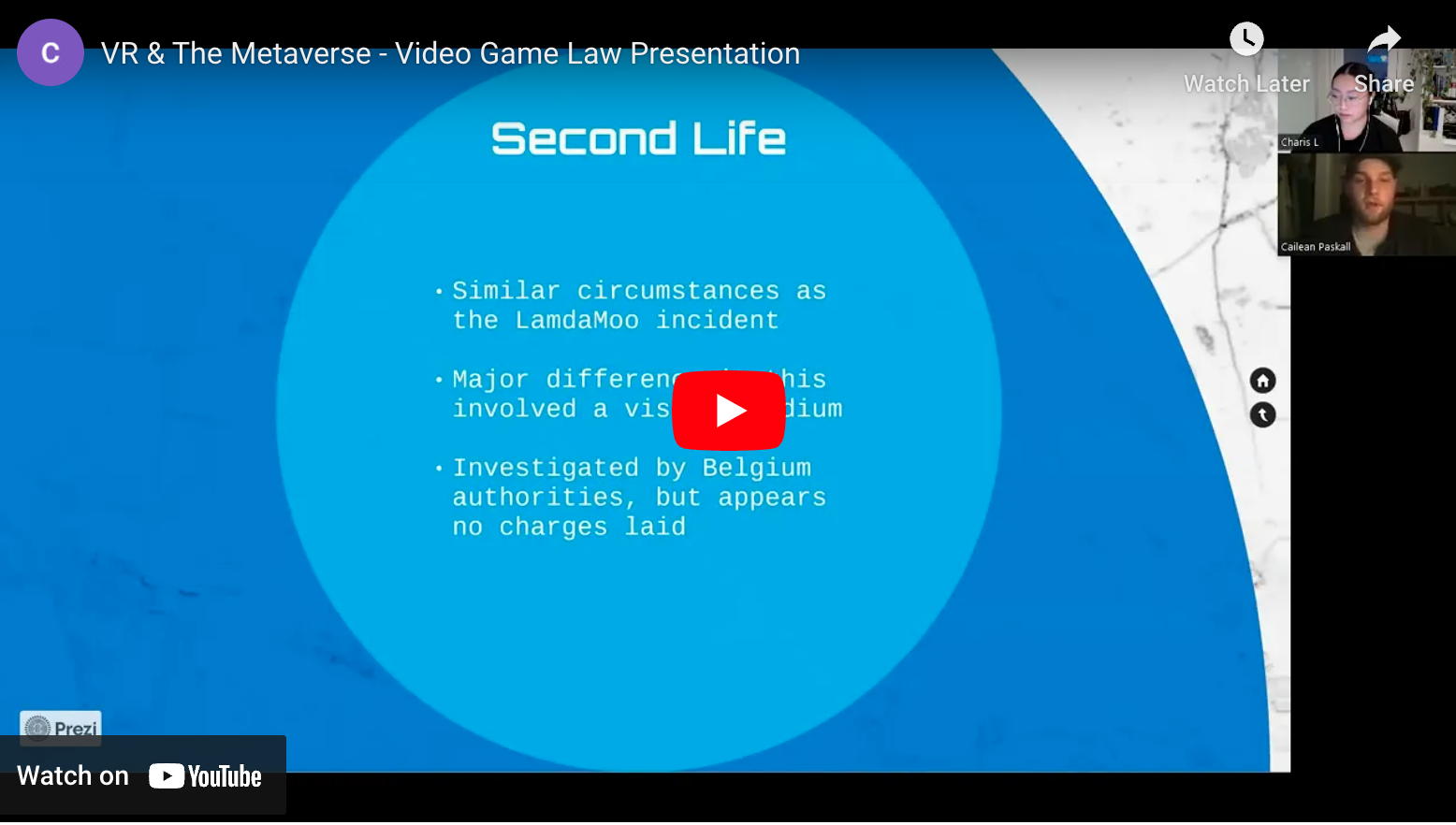 Hey all, You can find below the link to mine and Charis’ presentation! We hope you enjoy it and we would love to hear your comments. Feel free to comment on this post, the Youtube video, or even reach out to us! However, I would insert a trigger warning here. There is also a trigger […] 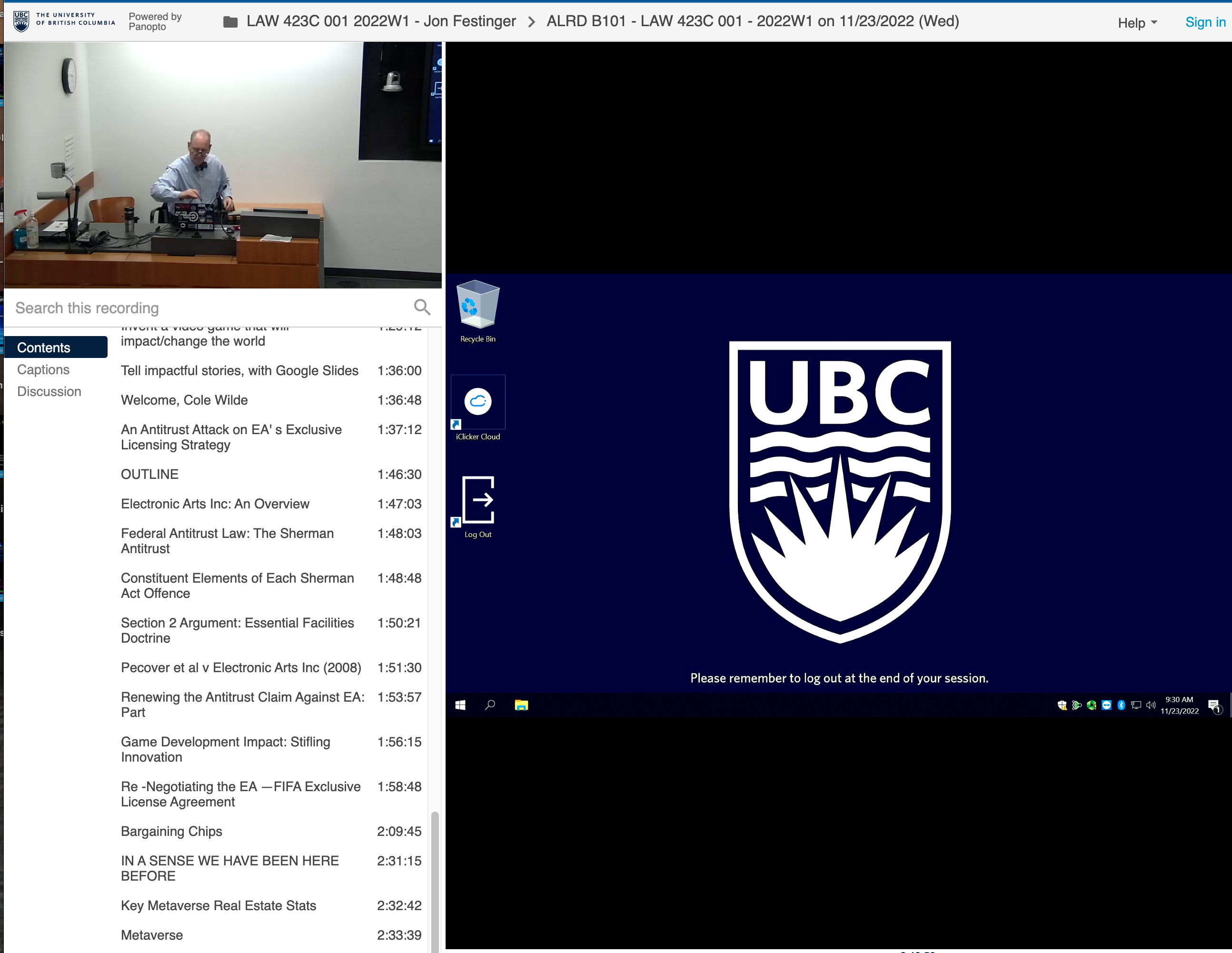 Slides and video below…   Jon 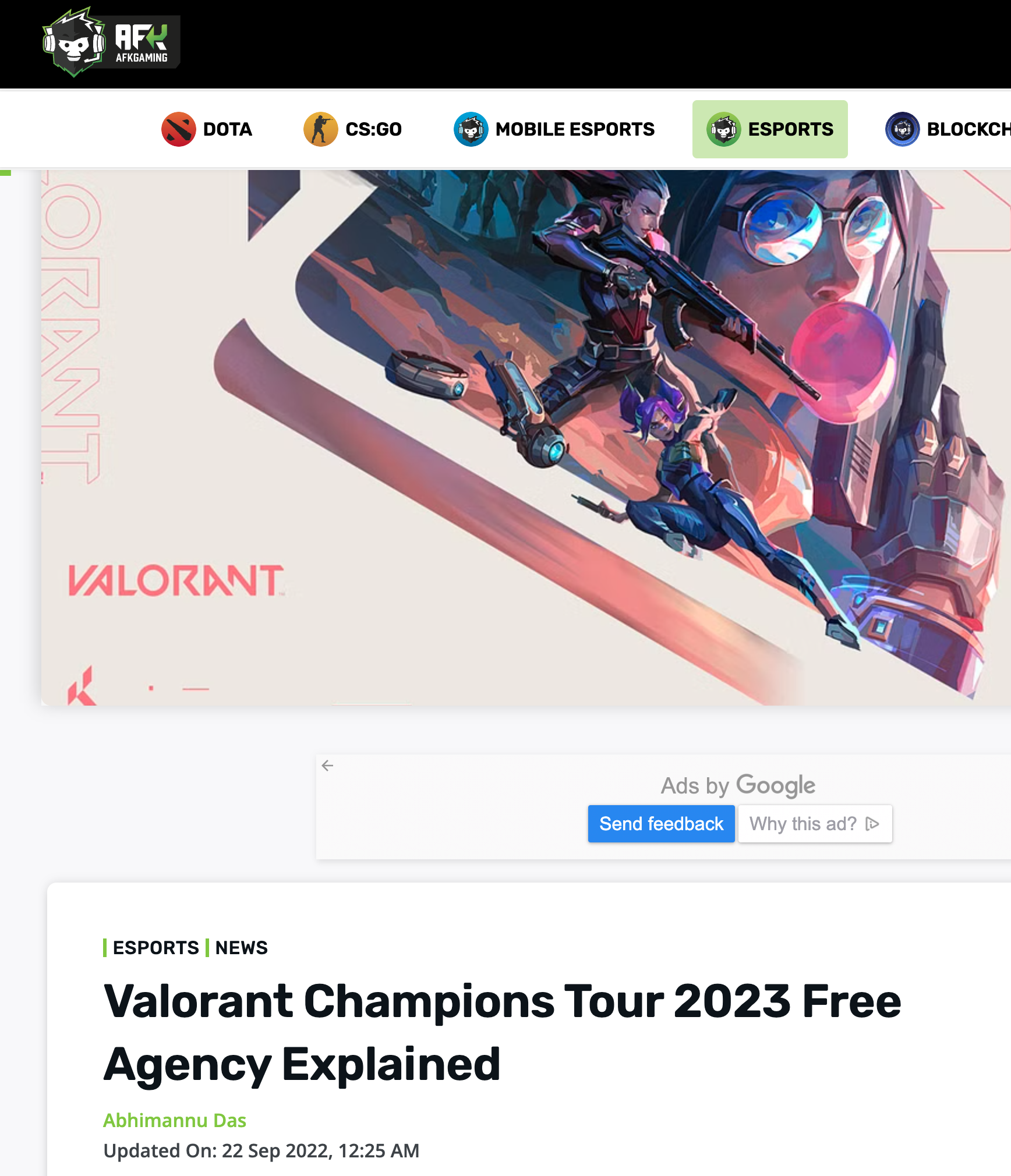 Similar to my last post detailing contract issues in LoL, the Valorant season has also ended and there is a lot of team restructuring going on. A fundamental change has occurred to the structure of esports within Valorant, in which Riot announced there will be three international leagues with 10 partnered teams each for the […] 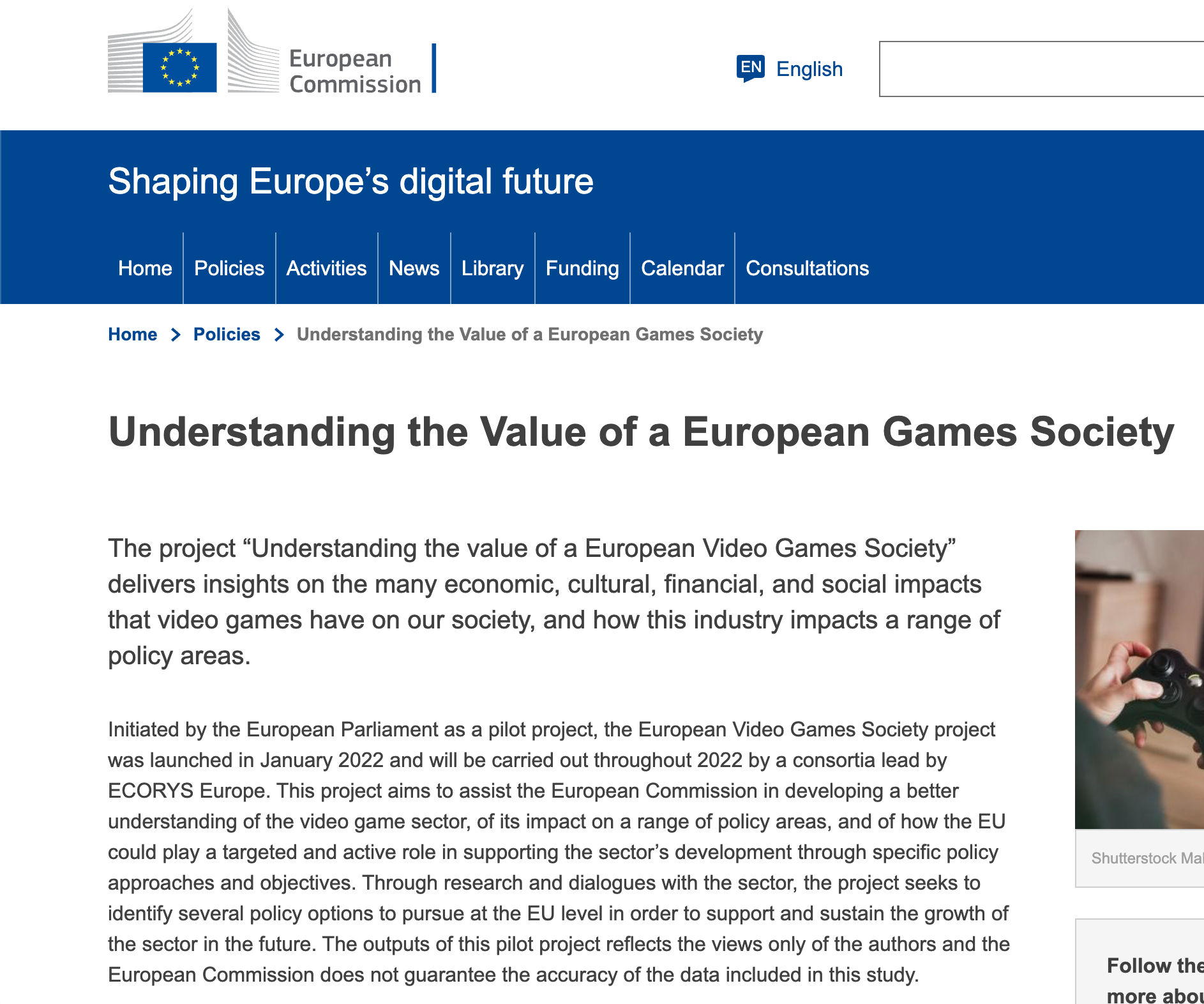 The VG industry is significant in Europe; it is estimated to be worth more than 21 billion US dollars and it keeps growing every year. We know that a lot of the industry activity emerges from Pacific Asia and North America but let’s not forget that Europe is home for major tech companies such as […] 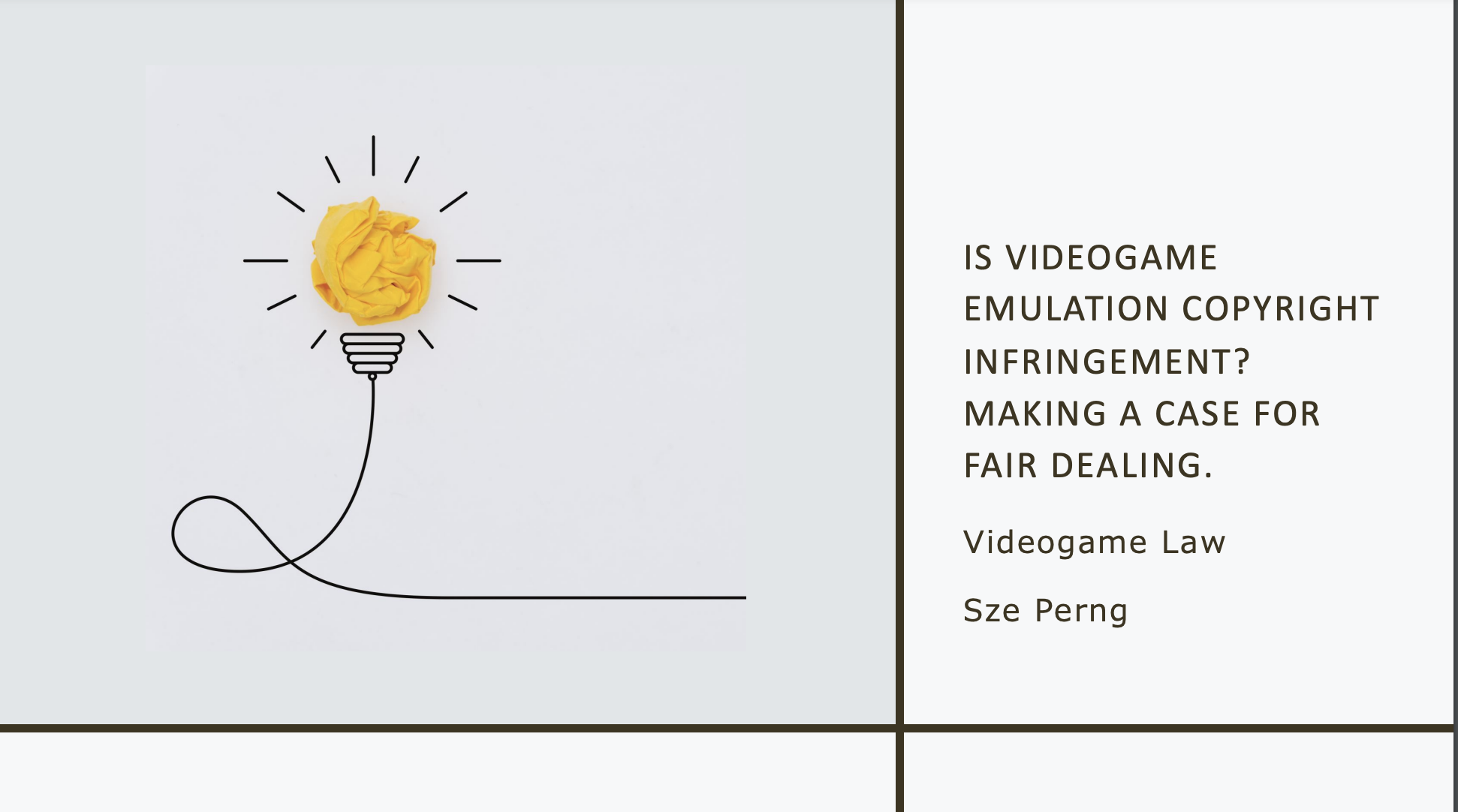 Hi everyone, just sharing the slides for my presentation next Wednesday about Emulating videogames and copyright infringement. Have a great weekend ahead! Emulation Presentation   Sze Perng 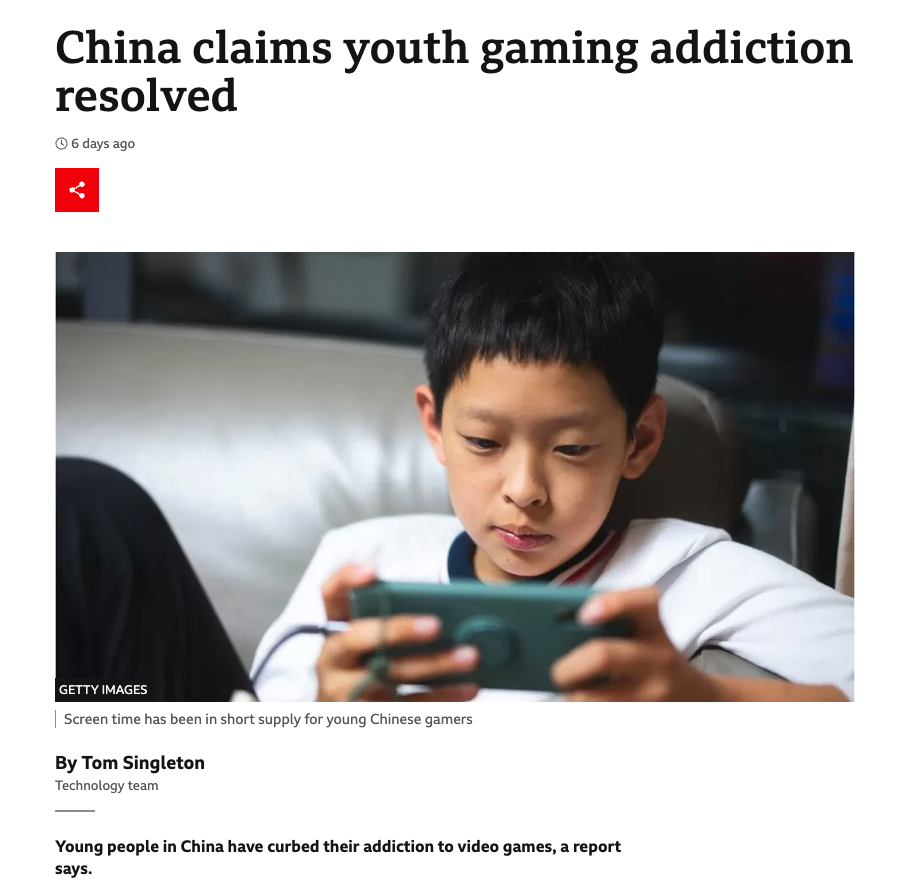 https://www.bbc.com/news/technology-63730316 https://www.cnbc.com/2022/11/23/china-shows-signs-of-easing-its-intense-crackdown-on-the-gaming-sector.html In Amit and I’s presentation about video game regulation, we briefly discussed China’s gaming regulatory regime. China has some of the strictest video game regulation in the world. As discussed in class last week, China restricts the amount of time minors can play video games, with youth gamers only being able to play […]