Can you defame an Avatar? Some tentative clues at the beginning of the path… 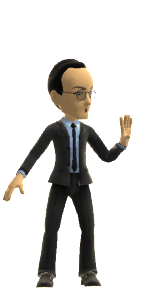 The above is the only avatar I’ve ever used out of its game-given context. It was generated on an X-Box 360. An article on some (gaming?) website showed me how to export it, and so I did. It is slimmer and more jaundiced looking than I actually am (or was at time). The blue shirt is pretty accurate although the minimal resolution doesn’t allow for whether it’s buttoned down (as mine are) or not. Let’s not even start in on the virtual hair and how much more the avatar has then is my current reality. Hair colour and the process of greying should also be beyond discussion.

The question of whether avatars can be defamed comes up periodically (See, for example, Defamation of Second Life Avatars: How the Laws of First Life People Could Be Invoked). Today I just want to set out a few possible first principles for further analysis. I will use Canadian law as my jumping off point simply because one of previous lives as newsroom lawyer acquainted me with some of the principles to be applied and the cases that apply them. Some of the discussion that follows first manifested (if memory serves) during an improvised reply to a question during the semester.

Hopefully this has been a useful conceptual introduction. Would appreciate any feedback or questions.