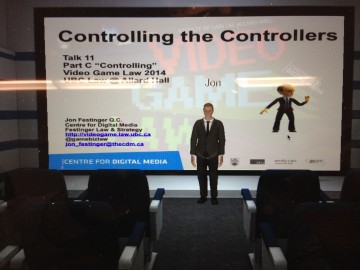 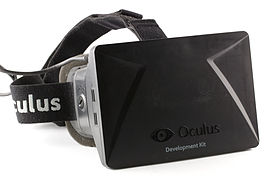 Our class experiment with Oculus Rift DK2’s went smoothly thanks Jesse Joudray of VRChat LLC. Seven participating students equipped with Oculus Rifts’ took in the class from an entirely different part of the law school, while the rest of us remained in our usual class room (B101 of Allard Hall). You can check out (or re-live) what the “Rift students” saw and heard without a 3D headset from the YouTube video you will find in this post. My already pronounced tendency to speak with my hands is certainly raised to new heights (or depths) through the joint efforts of animation and motion capture!

As can be seen from the various comments below, the “Oculus classroom” turned out to be a real success. No one really knew how things were going to go, and the experiment was just that – an experiment. What became clear is that immersive 3D devices have the potential to really work in an educational context. The day may one day come where schools are libraries, offices and common meeting places with most classrooms being virtual because learning actually happens better that way. We are far from that place right now, but before this experiment such a future seemed like pure science fiction. It does not anymore.

There are many obvious things that need to be addressed from a student perspective. These include note taking mechanisms as well as effective and direct (underline “direct”) ways to ask questions so as to fully and equally participate in the “real” classroom setting. If simple and intuitive technological means to resolve these issues are found, then access to education can be expanded in meaningful ways.

A couple of notes from the perspective of the instructor in this experiment.

My only interaction with the “Oculus class” was that I had a monitor not far away through which I could see my virtual students. Aside from my endless amusement that law students would not initially occupy the first row of seats in even a fully virtual classroom, there was nothing in the experiment which affected my teaching. I simply taught to the “real class” in front of me. At the end of the day it is precisely that piece of the puzzle which will have to grow. Creating meaningful feedback loops is arguably the key challenge in all of education. Accordingly it is not farfetched to suggest that creating feedback loops to and from the Oculus class and among all who participate in a class, no matter where they are physically located, will equally become the key to successful pedagogic implementations.

All this led me to wondering what would happen if I were ever called upon to teach to a class made up entirely of 3D headset users without there being a “real” classroom. In that case, seeing some representation of the facial expressions/reactions of each of the individuals in the virtual class feels to me to be a necessity for effective teaching. Achieving that might be possible, even today, if Kinect technology were to be used and the appropriate code written. However the headset device might have to look quite different and there would no doubt be some challenging design problems. When practical and elegant solutions to this problem are found we may truly be on our way…

The reactions from those participating came as a wonderful and heartening surprise. We should all look forward with some optimism to the chapters yet to be written about educational uses of 3D immersive technologies.