Playing for the Planet: The rise of Climate Change video games

Have you ever stopped to think about the carbon emissions of the cars you race in GTA? Ever thought about whether your Sim’s shower is water efficient or whether you should really cut that tree down in Minecraft? Some of us might not think about these things in our real lives, let alone our virtual ones, but you’re about to.

As the global climate strikes continue, today at the UN Headquarters some of the biggest names in the video games industry have formally committed to using their platforms to take action against the climate crisis. The “Playing for the Planet Alliance” saw leaders in the gaming industry including Sony Interactive Entertainment, Microsoft, Google Stadia, Rovio, Supercell, Sybo, Ubisoft and WildWorks, commit to tackling climate change.

While many of their commitments include reducing the carbon effect of actually playing their games (mostly around power consumption) many of them have focused on using their video games as a possible way to educate people about climate change. Many of the companies will host design-jams with their creatives to consider how they can “mindfully incentivise better environmental outcomes” within the games, without limiting the fun and enjoyment for players. This is consistent with the upwards trend we are seeing in video games, like Eco, that focus their story line on saving the world from man-made climate disaster. While this might seem like new ground, some of these games have been around for 10 years.

I am personally very interested to see the user reaction to environmentally friendly cues in decision-making games, and whether the response will reflect the real-world opinions on climate change. I am also interested in whether an almost forced sustainability in video games will have any consumer effect and change people’s behaviour outside the game.

How do you feel about having a story line driven by reducing pollution? Do you like that you can be environmentally friendly while playing video games or does this feel like big corporate pushing an agenda?

Many video games put the player on a hero quest to save the world. Maybe this time next year when I play Mario Kart I’ll be racing a Tesla. 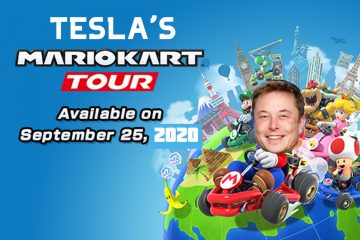