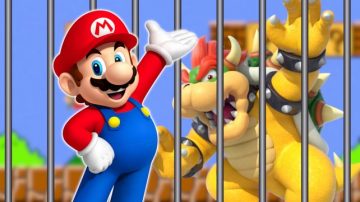 Earlier this week, Nintendo issued DMCA takedowns to SteamGridDB, a community site that hosts user-created images to be used in on Steam. Although the site is primarily meant to provide an aesthetically-pleasing alternative for fans, Nintendo games are not available on Steam and therefore would only be there as emulated ROMs downloaded without Nintendo’s knowledge or permission. The implication seems to be clear based on their selective use takedowns targeting artwork for only 5 games: these are games that Nintendo are still trying to actively sell themselves and want to curb piracy of them. Plus, the requests were targeted against the use of their own characters sprites, that left original creations and fan art alone; a decision that makes sense based on the potential

fair use and transformative nature of fan art in some situations.

But that’s not all! Nintendo was also responsible for setting off some drama in the Super Smash Bros Melee competitive scene that has everyone blaming each other. After licensing the right to host tournaments to Panda Global, they engaged in negotiations with another company called Smash World Tour. However, after failing to reach an agreement, Smash World Tour canceled their upcoming World Championships and the entire next season, costing the organizers hundreds of thousands of dollars. They claim to be blindsided by Nintendo & argued that Panda engaged in bad faith by preventing them from working out a deal. Nintendo refutes these claims and blame the decision to cancel the championships entirely on Smash World Tour (unclear whether they grappled with the issue of its subsequent legality without a license…). In response, Panda acted confused at all the blame it was getting, while admitting their CEO was vocal in support of their own interests (a little suspicious).  And the fans have decided to boycott Nintendo & Panda tournaments as a result – a mess created by the inability to agree on the use of legal rights.

This is just the latest in a long string of interventions made by “The Big N” against those who infringe on their intellectual property rights – if you’d like to learn more, stay tuned for my video presentation releasing soon all about Nintendo & their exploits 🙂