I figured everyone is likely going through some “News of the Week” withdrawals right now, so I wanted to pass along a funny situation that happened earlier this week.

The college football community was (briefly) ecstatic. Rumours of when the game will be released have occurred throughout the year, dating back to February of 2021 when EA officially announced the reboot of the game, formerly known as NCAA Football: 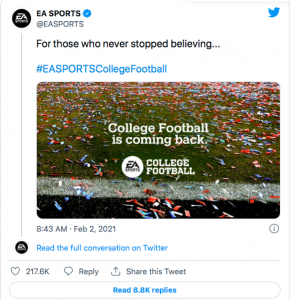 Unfortunately, like an offensive linemen making an improper adjustment before the snap, the tweet by Marcello was a false start. Only 4 hours later, EA was essentially forced to throw a flag on the play: 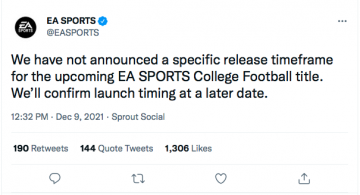 It appears the fans will have to continue to wait for the official release date. This exchange is merely the latest chapter in the unfolding drama that is the EA Sports College Football game.

Of course, the major development for EA and college football this year is that EA is now permitted to use the name, image and likeness (NIL) of the NCAA athletes. When EA originally made its reboot announcement in February, it did so on the basis that the players NIL would not be part of the game. This meant that the game would include generic, unrecognizable players. However, this all changed after the United States Supreme Court’s decision National Collegiate Athletic Association v Alston in July. Following that decision, the NCAA withdrew its NIL policies, and the athletes can now be compensated for their NIL, including by their replications in the EA sports game.

EA will most definitely be capitalizing on the popular college football market. It was reported that in the first two months after the NCAA withdrew their NIL policy, 60% of the total compensation for all athletes was going to college football players.

To recap, while it is now certain that the NCAA athletes will be included in the game, it is unclear when that game will be delivered. For now, it remains a mystery which lecture of a future video game law class will start with the slide “Happy EA Sports College Football Release Week”.