If you haven’t heard, TeamTrees charity drive is attempting to raise money for the Arbor Day Foundation in order to plant 20 million trees at $1/tree. This charity drive was organized by a known YouTuber known as “MrBeart”, who donated $100,000 himself.

One cool Videogame-based response is Seán William “Jacksepticeye” McLoughlin, who held a Minecraft stream on his channel and raised a whopping $153,000 to plant trees.

Another significant response came from a Fortnite streamer known as “Loserfruit”, who held her own stream to raise money. In comparison to the Jacksepticeye stream, Loserfruit’s stream only made $10,500. However, MrBeast ended up re-tweeting Loserfruit’s tweet, which caught attention of  Elon Musk, who ended up donating $1 million to the charity with a tweet stating “Ok, sounds legit, will donate 1M trees”.

It’s also pretty funny that Elon’s donation note was “For Treebeard” – if you don’t know who that is, Treebeard is an Ent/Tree Person from the Lord of the Rings Franchise. Elon has also changed his Twitter Name to “Treelon” and his avatar is now an image of a forest. I’ve included some screenshots showing the responses.

If you would like to read more, I’ve included two links below that provide more information on both the Videogame story and the wider Youtuber story. 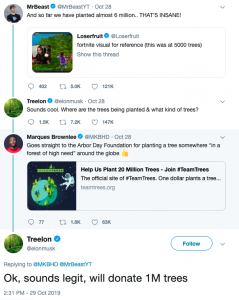 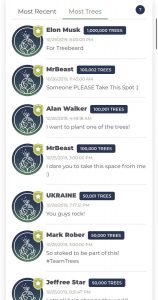