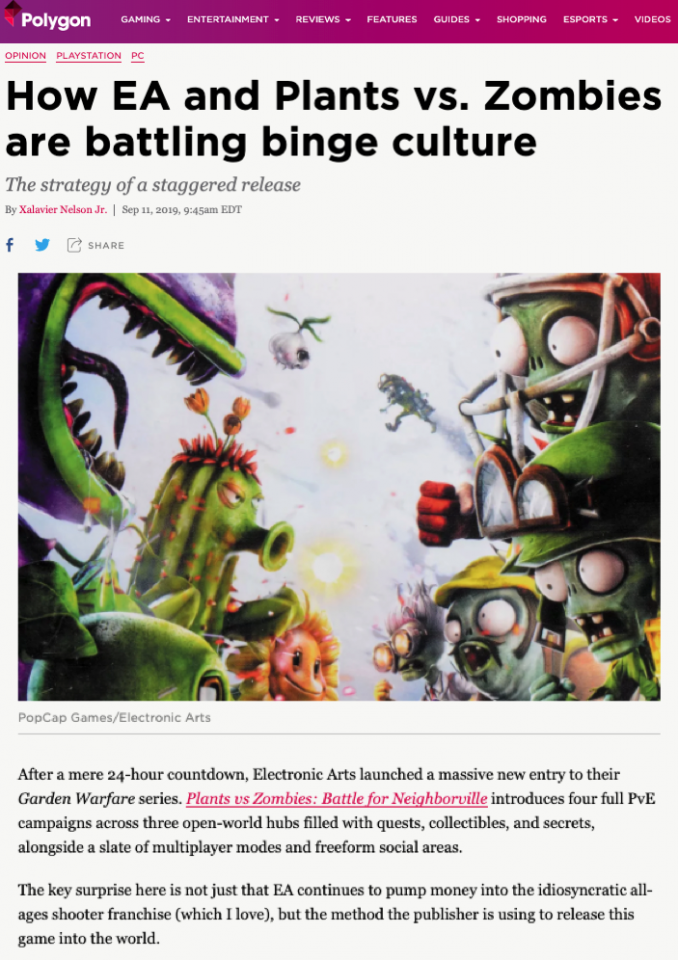 I just stumbled across this article that discusses an interesting new strategy for increasing player engagement with games. The idea is to release games in smaller pieces over time. Traditionally, games are released in their entirety when they are complete. The supposed problem with this is that it makes games “disposable” and incentivizes “bingeing”, where customers buy games, play the whole thing for a short, intensive period of time, and then shelve it or throw it away. The problem EA is fighting against is the fading attention of their customers after the release of their games. Instead of releasing a whole new game to renew interest, EA is experimenting with a staggered release model with one of its games, Plants vs Zombies: Battle for Neighborville. Even though the game is fully complete, it is being released over the course of six weeks. Additionally, EA is giving an incentive to buy early through a 25% discount off the full price.

I don’t really think of releasing a full game as a problem. Numerous games have been massively successful without this kind of release structure. Having said that, to compare this to television and movies, this could open the door for another category of more casual, episodic games as opposed to trying to make every game a big, blockbuster release. It’ll be interesting to see if this kind of strategy is successful or profitable enough that it shows up in other places. Anyway, even though it’s more business-focused, I thought the article seemed relevant enough to the course to share.