Why is law so slow to change in relation to technology?

My immediate reaction when this question was asked last week and this week was “because law is slow to change in relation to most things.” For example, last Friday (the 18th) was Persons Day, the 85th anniversary of the Persons Case. Sure took a while for that (now obvious and self-evident to most, I hope) decision to be made, and it had to go all the way to the Privy Council. There’s the old magical assertion of Crown sovereignty and the fact that aboriginal title has just been officially found by the courts this summer in Tsilhquot’in, despite it having been there all along. Human rights and the introduction of the Charter just 32 years ago. Animal rights – still waiting on that one, but with incremental signs of recognition and improvement (for example, a beautiful dissent in the 2011 Lucy the Elephant case Reese v City of Edmonton, and today’s dissent can always be tomorrow’s majority!). In the communication slides from today’s class, I saw hope for the new paradigm that could come with the age of virtual reality. For example, at the Animal Law Conference in Portland this weekend we learned about the use of technology, including computers and VR, and individualized cellular testing – both in lieu of animals – for greatly improved testing of medical procedures, drugs, and toxins. As technology continues to develop, I am hopeful that the incremental changes that will follow in the law will improve the circumstances for everyone, from gamer/creator/connectors to non-human animals. (Also, speaking of Portland, there is an amazing bar there called Ground Kontrol which has two storeys full of arcade games (pic below) – highly recommended! (http://groundkontrol.com/) 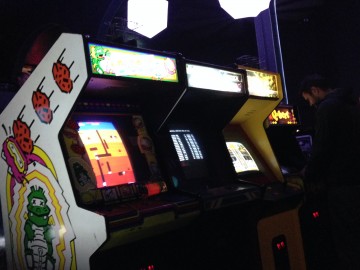 One response to “Why is law so slow to change in relation to technology?”