Games, Violence, and Your Brain 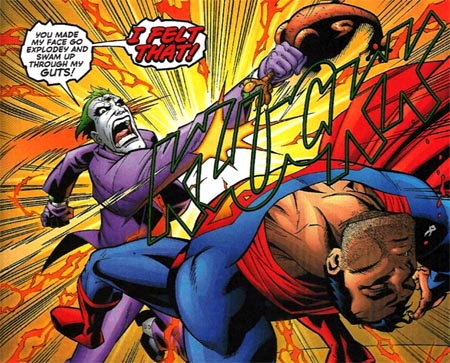 The ongoing battle over the psychological effects of violent games continues in a recent study published in the most recent edition of Cyberpsychology, behavior and social networking. From the abstract:

Christian Happ and his colleagues recruited 60 students (20 men) with varied video gaming experience and had them spend 15 minutes playing the violent and bloody beat-em-up game Mortal Combat vs. DC Universe on the Playstation 3. Some of the participants played the morally good character Superman, while the others played the Joker, the baddie from Batman. Apart from that, the game experience was the same for all participants – their time was spent in hand-to-hand combat against a variety of other computer-controlled game characters.

Another twist to the experiment was that before the game began half the participants read a bogus Wikipedia article about their character, designed to encourage them to empathise with him. For those playing Superman, the article said how he’d come from a loving family. The Joker article described how he’d suffered abuse in his childhood.

Another test was an old favourite known as the “lost letter technique”. As the students left the lab, they saw a stamped and addressed envelope on the floor outside. Those who’d played Superman in the violent game were 6.2 times more likely to post the letter or hand it in to the researchers, as compared with those who played The Joker (the rates were 20.7 per cent vs. 3.3 per cent, respectively).

Beyond the typical question of whether on-screen violence leads to real life violence, this study adds the fascinating question of how games impact sociability generally. However, as always with media effects studies, there is lots of room to challenge the results. For example, did participants’ past knowledge of Superman and the Joker change how they related to the character? Did the violence matter, or would the effect have been the same if the participants had spent 15 minutes solving puzzles as Superman or the Joker?

One response to “Games, Violence, and Your Brain”