From speculative sentimentality to utility: Reimagining the valuation of NFTs in a metaverse-linked future 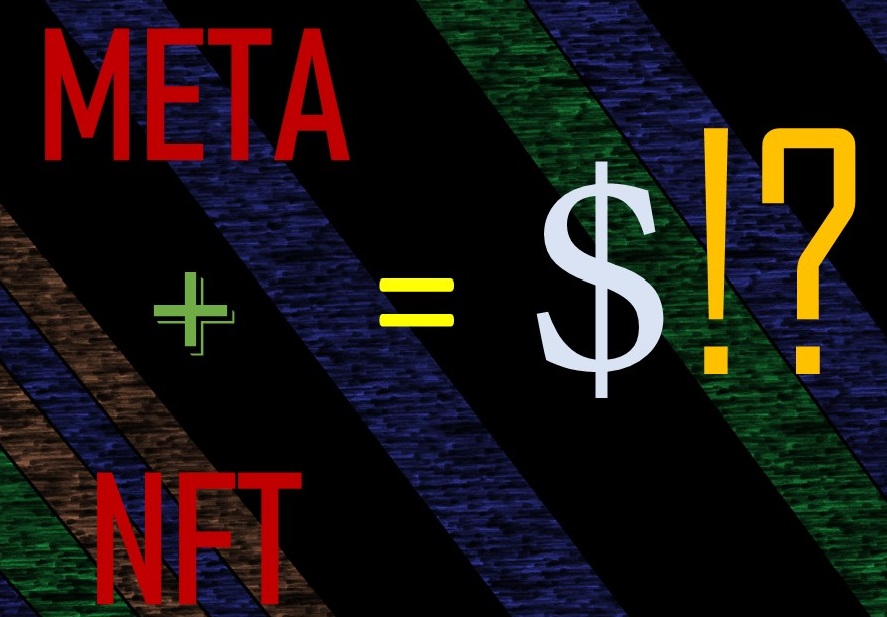 On the 28th of October 2021 a pixelated digital artwork of a cartoonish character called “Cryptopunk 9998” was reported to have been sold on Ethereum blockchain as a Non-fungible Token (NFT) for 124,457 Ether — valued at more than half a billion US Dollars at the time of execution of the transaction.[1] On the same day, Facebook (now Meta) CEO Mark Zuckerberg resurfaced across global news headlines as he announced an ambitious restructuring of Facebook’s current operations into ‘Meta’, a new company that encompasses all preexisting Facebook products along with a bold aim — creating a virtual ‘metaverse’ using “immersive experiences like augmented and virtual reality to help build the next evolution in social technology.”[2]

This article attempts to predict the role of NFTs in a future where such a metaverse (or metaverses) play an important role in our daily lives, akin to the internet of today. This consequently yields a conclusion outlining the valuation and prospective monetization of NFTs based on current standards of reckless speculation to a theory of perceivable utility.

What is an NFT?

NFTs are digital assets that are created and stored on a digital ledger, also popularly known as a ‘blockchain’. By virtue of the underlying technology involved, the process of creating an NFT requires that each constituent of this asset class bears certain unique characteristics and that these must be clearly distinguishable from all other constituents – thus each NFT is a one-of-a-kind, unique and irreplaceable asset who genuineness cannot be compromised. These attributes result in an NFT’s non-fungible (i.e., non-interchangeable) attribute. Moreover, once created, NFTs cannot be altered or destroyed in any way whatsoever.[3] Due to its unique attributes and immutable properties, NFTs are commonly used in the contemporary context as digital certificates to prove authenticity and ownership of intangible goods stored online (such as images, videos, digital art, etc.), or in rare instances, tangible goods (like a physical artwork or painting).

Latent issues and criticisms of NFTs

The adoption and use of NFTs for carrying out sales of digital artworks have seen an exponential rise in the past couple of years. However, the extravagant (and, arguably, absurd) prices[4] which many NFT-backed artworks have recently been fetching have garnered much awe and critique from the public.

Optimists believe that the apt valuation of blockchain-backed products and services (which includes NFTs and cryptocurrencies) is yet to be realized as the industry is still in its nascent stage. On the other hand, skeptics have criticized and forewarned of the extent and effect of speculation and volatility within the industry and have cited such erratic and sporadic consumer behavior to resemble the features of an ‘economic bubble’.

Another significant critique of NFT-backed artworks relates to the fact that ownership rights attached to NFTs rarely include the transfer of, or license to the copyrights vested in the artwork. As a legal consequence, NFT owners may be significantly restricted in the manner in which they can make use of the artworks despite having paid millions for it.

Evidently, NFTs seem to have no intrinsic value of their own as they are typically devoid of real-world applications or utility. The intangible nature of such NFT-backed artworks which reside digitally on the internet begs the question as to why anyone should pay money and buy them when they can be viewed for free online especially when most NFT owners are unable to restrict others from viewing, accessing, or even copying them.

Nevertheless, when viewed from the eyes of a curator of artworks, a prudent counterargument that can be made to the above-mentioned critique is that all art, whether physical or otherwise, in and of itself does not have any intrinsic value whatsoever. It is an indubitable facet of human nature to curate collections of certain things and to attribute value to them based purely on personal sentiment. Some considerations when attaching sentimental value often include factors such as the legacy of the artist(s), the social impact of the artwork, or at times, just mere bragging rights.

Thus, given the present state of affairs, it can be said that NFTs seem to stand at an equal footing with collectibles such as physical artworks, wherein the distinction between the tangible and intangible nature of such works are blurred or are of little to no relevance in the mind of a curator. This correlation becomes more apparent upon observation of the functioning of NFT marketplaces which, at the moment, inherently replicate the structure and mechanisms of traditional auction houses. In fact, some traditional auction houses have already caught up and embraced the NFT trend, such as Christie’s where an artwork titled “Everydays: The First 5000 Days” was for a record-breaking 69.3 million USD in March 2021.[5]

The concept of a metaverse refers to a hyper-realistic virtual network and is touted to be the future of the internet. It is an embodiment of a culmination of modern technologies such as virtual and augmented reality, artificial intelligence, and computer vision, which are intricately woven together in a synchronous fashion to simulate a parallel form of human existence in a three-dimensional online realm. In essence, the implementation of metaverses seeks to expand the ways in which digital interactions between people take place over cyberspace through the deployment of immersive technologies which complement existing networked technologies and encompass all associated activities which take place over the internet.

Some of the initial features which big tech companies such as Facebook and Microsoft have been steadily developing include the ability to socialize within virtual spaces — which includes virtual conferencing through the creation of dynamic virtual workspaces, multiplayer gaming, hosting of events such as concerts and movie screenings, and virtual shopping malls. Arguably, the extent of activities and features which can be included within a metaverse is only limited by one’s own imagination.

Contemplating the role of NFTs within the metaverse-realm

During Facebook’s annual developer conference on virtual reality – ‘Connect 2021’, Mark Zuckerberg announced an overhaul of the Facebook company’s activities by announcing a shift in focus towards building products and technologies with a metaverse-first approach. He also announced the creation of a new company ‘Meta’, which would form an umbrella corporation engulfing all new and existing Facebook companies and products in order to facilitate this transition.

Interestingly, during this ‘Connect 2021’ event, passing references were made to highlight the importance of developing crypto and NFT based technologies in order to develop Zuckerberg’s idea of the metaverse.[6] Through the conference, a potential use case scenario of these technologies was also explained where the platform supported limited edition NFTs (such as 3D avatars and collectibles) which could be displayed within personalized digital spaces and also resold in a secure manner.[7] A similar reference was also made in Mark Zuckerberg’s ‘Founder’s Letter, 2021’ which was published on Meta’s website on the same day citing plans to support “crypto and NFT projects in the community.”[8]

In one of the examples showcased during the ‘Connect 2021’ event, a person using augmented reality glasses invited their friend to join a real-life concert, and both of them thereafter proceeded to attend a “metaverse afterparty” where they were able to interact with other avatars and buy merchandise sold as NFTs.[9]

While it does seem that Facebook’s newfound intentions to enter the blockchain industry at this stage via the ‘Meta’ announcement may be an attempt by the company is trying to catch up to the recent crypto bandwagon, however, in my opinion, this is not true. In fact, Facebook had started working on developing blockchain technologies as early as the summer of 2017, and as of today is planning to launch a payments system with its own stable cryptocurrency called ‘Diem’ (formerly “Libra”), along with a digital wallet ‘Novi’ (formerly “Calibra”), in the near future.[10]

On the 2nd of November 2021, Microsoft held its annual developer conference – ‘Ignite 2021’ where CEO Satya Nadella announced the company’s plans to implement a metaverse-based office suite tailored towards creating virtual workspaces[11] as well as an expansion of its Xbox division to cater to gaming within its own version of a metaverse.[12] This news comes shortly after Mark Zuckerberg’s ‘Meta’ announcement on the 28th of October 2021 and is, in my opinion, a strong indication of the tech industry’s future plans, i.e., the deployment of metaverse-based platforms, tools, games, and software.[13]

Moreover, Meta’s foray into the blockchain space naturally opens up a lot of opportunities where the utility of NFTs could be realized as gets passed on to mainstream audiences through large-scale adoption, albeit such utility may be intrinsically tied into the metaverse itself. Onboarding a large number of users onto a metaverse-based platform while ensuring low barriers of entry could also potentially remove the elitism and exorbitant costs attached with traditional auction houses (and some NFT marketplaces) and therefore help in determining realistic prices for NFT-based products.

In a reality where the implementation of metaverses ensures that its parallel coexistence becomes akin to our lives on the internet today, the oft-cited criticism that the works backed by NFTs are intangible, or the fact that NFT owners do not possess any copyrights in such works may cease to be of substance in determining the value of such NFTs. This is because deeper integration of metaverses within human society could potentially lead to the elevation of the status of an NFT — which is currently viewed as a collectible from a curator’s standpoint to becoming a thing of utility where such NFT-backed digital objects (perhaps in the form of digital sports gear, vehicles, artistic software tools, etc.) could have real-world application and therefore hold intrinsic value.

[3] Unless there is a doomsday scenario where a global power failure causes all electricity lines around the world to shut down forever.

[4] https://decrypt.co/62898/most-expensive-nfts-ever-sold; Here Are the 14 Most Expensive NFTs Sold to Date, From Beeple to Mad Dog Jones and Beyond (artnet.com).

[11] Microsoft Cloud at Ignite 2021: Metaverse, AI and hyperconnectivity in a hybrid world – The Official Microsoft Blog.

[12] Microsoft Says Its Metaverse Will Include Xbox Gaming – Game Informer.

One response to “From speculative sentimentality to utility: Reimagining the valuation of NFTs in a metaverse-linked future”